The Fiesta of San Fermín has been featured in many films with different directors, but the rest of Navarra is not far as locations for sequences of movies famous both in Spain and internationally.

In recent years, Navarra has been the scene of film shoots that have had great repercussions at national and international levels. Well-known actors and actresses such as the Oscar winnersJavier Bardem, Penélope Cruz, Imanol Arias, Cameron Diazand Martin Sheen and a long list of Spanish actors such as Carmen Maura, Hugo Silva, Mario Casas, Clara Lago, Carmen Machi, Karra Elejalde and Dani Rovira have put some of the most emblematic towns, villages and landscapes of Navarra on the map thanks to the popularity of the films they have featured in.

Many of the people who have seen Ocho apellidos vascos, Las Brujas de Zugarramurdi or The Counselor have visited Leitza, Zugarramurdi or the Bardenas Reales to relive the scenes that made them laugh, frightened them out of their wits or moved them. However, we should also add the scenes that captivated filmgoers in the past, in mythical films such as Robin and Marion, Patton, Secretos del corazón or Falstaff – Chimes at Midnight, and those that soon be the location for films under way such as Anacleto, agente secreto, with Imanol Arias in the lead role, or El Guardián invisible, based on the first novel of the trilogy by Dolores Redondo set in the Baztan valley.

We propose a selection of 23 films that are shot in the 13 most representative locations in Navarra: 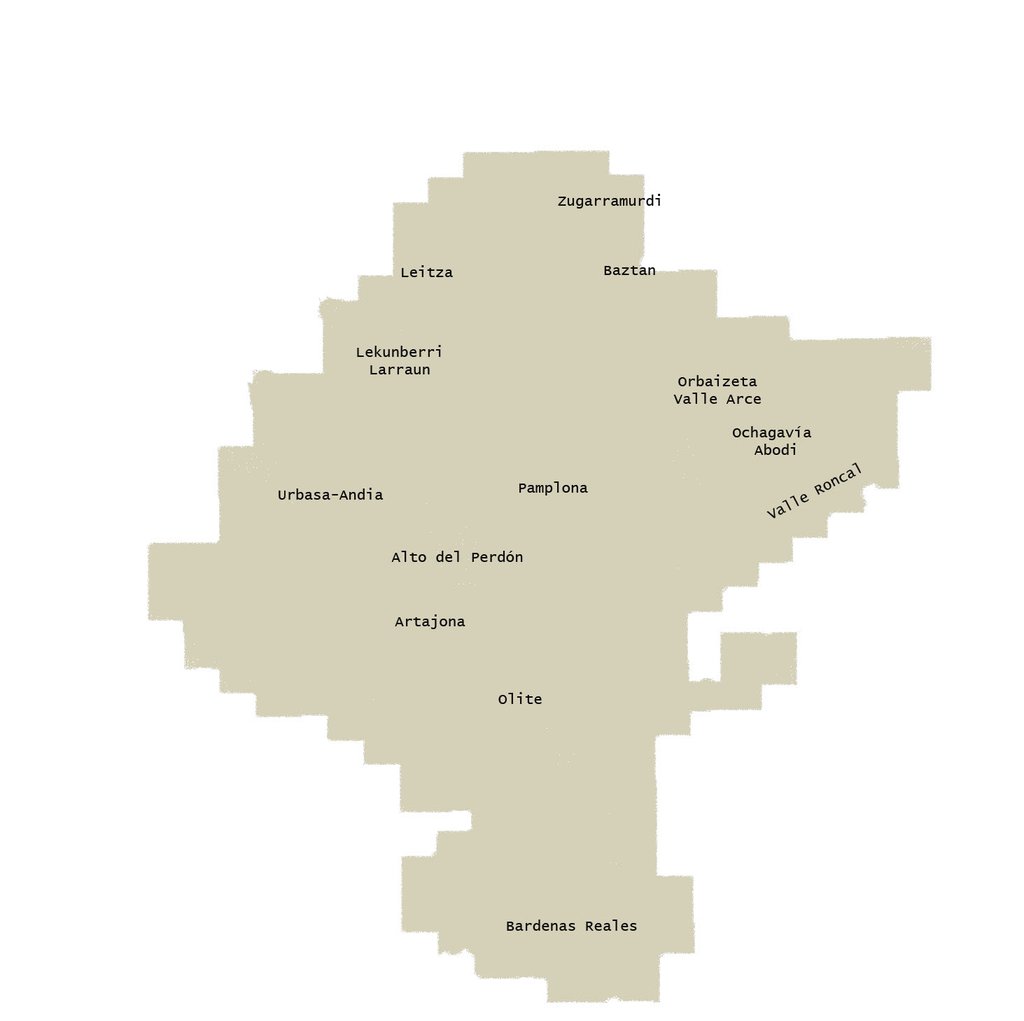 The Caves at Zugarramurdi: a beautiful natural spot with an unpronounceable name. It preserves a magical halo around it because until the 16th century it was the scene of witches’ covens and the revenge of the Spanish Inquisition.

Leitza: a town in the foothills of the Pyrenees crossed by the Plazaola Greenway. Surrounded by green meadows, it has a delightful historical quarter and fine farmhouses are seen on the hills around the town.

Pamplona: a modern, hospitable city that is crossed by the Pilgrim’s Way to Compostela and home to the world-famous festivities of San Fermín. You will be surprised by its centuries-old city walls and cobbled streets, parks and delicious pintxos (tapas).

Natural Park of Bardenas Reales: Located in southern Navarra, this desert-like area has been declared a UNESCO Biosphere Reserve. The erosion of its clay, chalk and sandy soils has created spectacular rock forms that recall the lunar landscape.

Baztan Valley: this green valley with a mild climate is not far from the sea in the foothills of the Pyrenees. A land of people who returned after making their fortunes in the Americas, it features robust noble houses and farmhouses made from pinkish stone, monasteries, famous caves and mythical forests.

Sierra de Abodi: a mountain range covered with meadows around the Irati forest, one of the most spectacular beech-fir woods in Europe. The presence of several dolmens bears witness to the ancient shepherding tradition of the area.

Ochagavía: located in the north of the Salazar valley next to the imposing forest of Irati, Ochagavia is one of the most picturesque villages in the Navarrese Pyrenees. Its main feature are its mediaeval bridge, its stony streets and fine houses on each side of the river Anduña.

Urbasa-Andía National Park: meadows and leafy beech woods are the main features of this protected area, whose edge falls brusquely on the valley of the Améscoas to create an impressive natural viewpoint over the cirque surrounding the source of the river Urederra.

Artajona: a town in the Central Zone of Navarra that stands out for its impressive 11th-century fortress above the town: “El Cerco”. This mediaeval complex has crenelated towers linked by a rampart walk and the church-fortress of San Saturnino, a solid and imposing 13th-century building declared a Historic-Artistic Monument.

Sierra de Aralar: an area of quiet meadows, dolmens and beech trees of many colours, watched over by the Romanesque sanctuary of San Miguel de Aralar. Its rocks resemble a Gruyère cheese inside, and it hides natural treasures such as the cave at Mendukilo or the source of the river Iribas.